Teppo Lundell, Senior Lecturer of Business Competence, has worked at the Satakunta University of Applied Sciences (SAMK) for 18 years.  Lundell also leads the Academy of Business and Technology, established in 2018, where SAMK students work on real problems and development projects of companies.

Until twenty years ago, Teppo Lundell would never have imagined himself ending up as a teacher. He first became acquainted with SAMK in 2004 while leading an EU project implemented on the campus. After the project, he continued working at SAMK, this time as a coordinator of business cooperation in Rauma.

His first teaching assignments were related to economics, which Lundell had studied before. His responsibilities slowly expanded, and over the years, Lundell has been involved in many things. Since 2008, he has served as a mentor at SAMK’s Enterprise Accelerator.

“At some point, I started teaching more subjects. I have taught entrepreneurship in both Finnish and English, and I have been involved in a wide range of projects,” says Lundell.

In 2018, the Academy of Business and Technology was established at SAMK. The aim of the Academy is to bring students closer to the business world already during their studies. Lundell joined the Academy at the beginning of 2021. Since then, he has led the operations together with Kalle Toivonen.

Teppo Lundell has enjoyed his years at SAMK. From the beginning, he has sought to ensure that students gain as much knowledge as possible from outside the classroom, from real life. The Academy of Business and Technology responds perfectly to this need.

“The primary goal of the Academy is to help students complete their studies flexibly in collaboration with companies. For companies, the collaboration provides an opportunity to work with the experts of the future,” says Lundell. 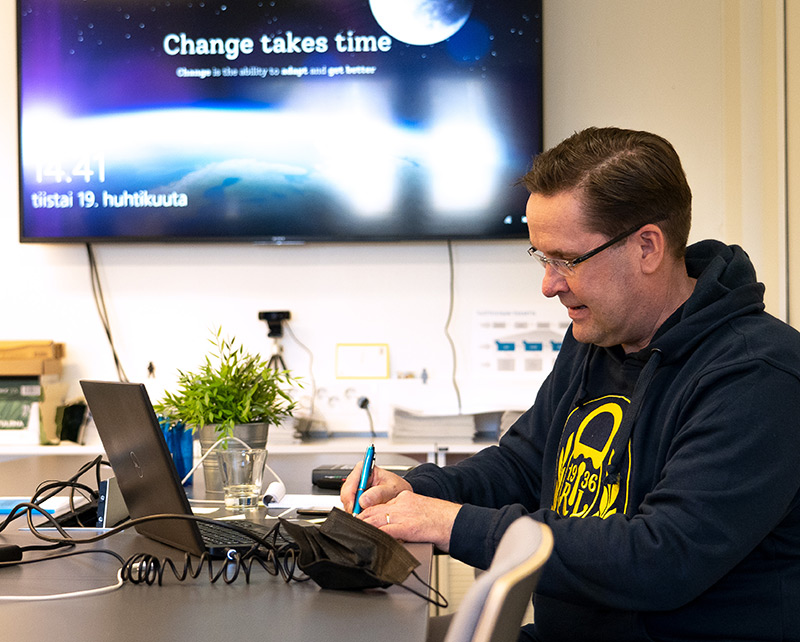 There are currently 15 business administration and engineering students in the Academy. At the Academy, the approach to learning differs from the traditional teaching model, as courses are replaced by projects implemented for companies. This type of teaching model is particularly well suited for students who learn better by doing. The students are always supported by an expert who supports and guides the implementation of the project.

“The Academy provides a great opportunity for young people to expand their networks. In these projects, students automatically become acquainted with key personnel and companies in the Satakunta region. In the best case, these networks can help students find work after completing their studies and help them move forward in their career,” says Lundell.

The polytechnic field has been subjected to cuts and reforms for a long time. They have caused some turbulence, but according to Lundell, recent reforms are going in the right direction. SAMK’s latest organisational reform took effect in 2021.

“I sincerely believe that the reform has been successful, although its effectiveness and success can only be assessed in a few years’ time.”

Lundell says that he has enjoyed working at SAMK’s Rauma campus, which is also attested by his long career in the organisation. Lundell also feels that SAMK has always given its employees the opportunity to develop their skills and expand their role in the direction of their interests.

“The atmosphere on the Rauma campus has always been good, and we have received a lot of praise from it, especially from international students. The low hierarchy and the opportunity for open discussion make the environment pleasant for both students and staff. We are a close-knit community, which makes our campus a unique and functional entity!”

Graduate students – bachelor's and master’s degrees – are very satisfied with their studies at SAMK.

Rauma Maritime education is celebrating its’ 140th anniversary. The education has gone through many development stages during a century. Intelligent maritime management and logistics are nowadays essential parts in SAMK strategy.
May 6, 2022 | RDI

Anu, the new Faculty Secretary in the Faculty of Logistics and Maritime Technology