This is the first time a ceremonial chain is presented in the history of Satakunta University of Applied Sciences. This event marks the start for the 30th anniversary celebrations that will be taking place next year. SAMK wants to create new traditions during this year of celebrations.

The designing process for the ceremonial chain began in April of 2020. SAMK wished for a modern and simple design for the chain. It was important for the design to include the SAMK logo and reflect its history of origin.

Silver was chosen at an early stage for its modern and distinguished look.

– On one hand, we preferred a modern ceremonial chain, its design inspired by the future. On the other hand, our desire was to create a new tradition. Also, we would like to see the chain used often in the future, says Pekka Ekberg, the chairman of Satakunta Chamber of Commerce.

– Satakunta Chamber of Commerce decided to donate a ceremonial chain to Satakunta University of Applied Sciences as a symbol of their highly valued, important cooperation. SAMK prepares experts for the future, he continues.

Designer Assi Arnimaa-Leinonen explains that the visual atmosphere of SAMK and the logo are very minimalistic. For this reason, Arnimaa-Leinonen decided to base the design on simplicity. A ceremonial chain as such, is a very traditional object but this version is fresh and modern.

– I created a kind of three-dimensional pattern from the elements of SAMK logo. Their logo communicates the aspiration of moving forward and developing. The form of the chain is universal, it suits the SAMK’s profile and doesn’t emphasize any individual faculty, Arnimaa-Leinonen describes. 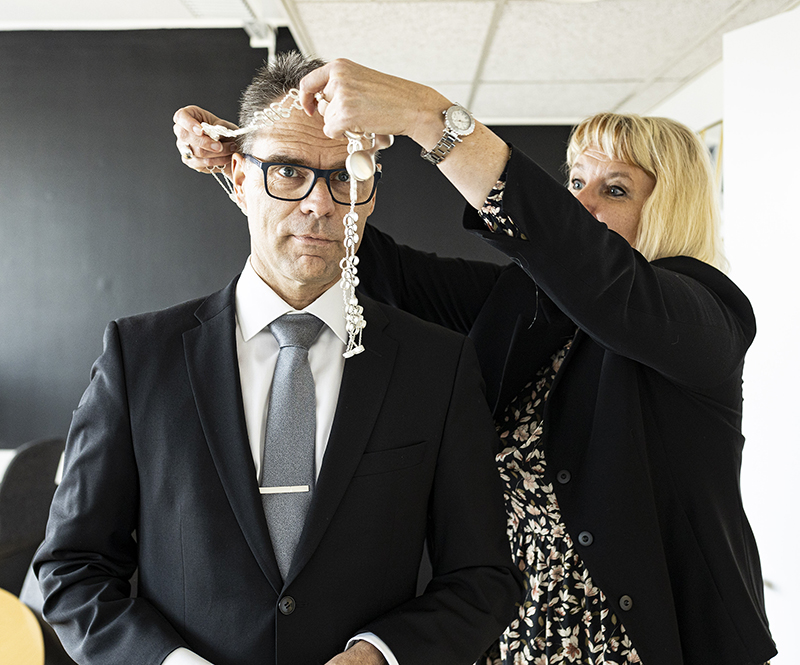 The Ceremonial chain was designed by Assi Arnimaa-Leinonen. The logo of SAMK and its simple visual look inspired the designer. Silver was chosen for the material since it creates a modern and distinguished look.

Photo: The CEO of Satakunta Chamber of Commerce Minna Nore passing the ceremonial chain to Jari Multisilta, the CEO and principal of SAMK.

The duty of university of applied sciences is to produce competence for the region in the form of experts and studied data.

Universities of Applied Sciences follow their graduates five years after they have got their degree. The aim of the survey is to find out how they have been integrated into the job market and how happy they are with their degree.
Sep 3, 2021 | Sustainable development

SAMK is sustainable and responsible university of applied sciences