Robotics Academy, which has been in operation for a bit more than a year, is a modern form of education concentrating on practical business projects and developing concrete technology competence.

The operating principle of Robotics Academy is “Cooperation in a good mood” Things are dealt with seriously but using as much humour as possible. When coming to school is fun, the projects proceed smoothly. Yumi dual arm robot is operated by second year Robotics Academy student Jani Lautamäki and Sanni Sjöholm, who started her studies in autumn 2018.

In the future, robotics will expand in all sectors. In industry robots have been used for almost 60 years already, but now especially service, logistics and collaborative robotics equipment manufacturers experience growth in business. Development of robotics technology and growing production volumes decrease unit prices while the companies´ investments in robotics are increasing.

The automation of operations is given more and more consideration in the field of SMEs, also in labour-intensive fields, mainly to optimize operations and make the human labour more rewarding. Robots are already a part of our everyday life: at a pharmacy they deliver medicines from the store and wash the floors in shopping centres during the night. Robotics is a global megatrend, and SAMK´s role in the region of Satakunta has been to act as an impartial pioneer in robotics.

Robotics Academy functions as a collider of students and companies by offering new methods of studying for pragmatic students and giving companies a possibility to implement technological projects with the students. The model enables finding fresh and innovative approaches as well as transferring new technological competence to companies in a form that is as easily utilizable as possible.

– There´s still a lot of work to be done in the automation and robotization of the companies in Satakunta. By educating students in a practical manner, based on the needs of the companies, we build human capital potential and with the help of the slow recruiting of the Academy we reinforce the availability of workforce to companies. A large number of students want to stay at their place of study to work, so it is important that they have competence that serves the companies in the region, reminds Mirka Leino, Principal Lecturer and Head of the Automation Research Team.

Combining the needs of the companies and innovative students 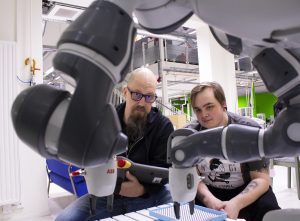 Marko Hakanpää and Viljami Murtomäki started their studies in Robotics Academy among the first students at the beginning of year 2018. Hakanpää was involved in an Oras company case where the students programmed a collaborative robot to assemble tap parts.

SAMK introduced the academy model in 2017. The students selected for academy studies conduct their studies by working in different, real technology projects. During the first year over 30 different projects of various sizes have been carried out. At the moment Robotics Academy has 22 students from SAMK and five exchange students from Spain and Belgium.

– The topics for the projects come directly from the companies in the region and there is always a concrete need, i.e. the aim is to achieve a practical outcome at the end of the project that meets the needs of the customer. It can be for example a robot application, simulation of production, modification of a production cell or a technology data packet, Leino tells us.

When educational content is allowed to live according to the needs of the companies and student´s own interests, the content will always stay up-to-date.

The idea of Robotics Academy originated from the passion of innovative teachers to renew tuition and the wish to serve the companies in the region of Satakunta.

– One advantage of the model is its dynamism. When educational content is not strictly bound but lives according to the needs of the companies and student´s own interests, the content will always stay up-to-date and the student will have an individual learning path. This is no bulk product, reminds Petteri Pulkkinen, Research Director of SAMK.

– We believe in the culture of experimentation and open-mindedness. With projects the students get to experiment with different technologies and find their own areas of interest. In this model also the teachers are ready to experiment and adapt their tuition on the fly. The success of the academy tells in a good way about the corporate culture at SAMK, the willingness to renew and try new methods of teaching, Pulkkinen emphasizes.

Robotics to the everyday life of the customer

The way to the academy is through interviews, as studying in the Robotics Academy requires from the student self-direction, motivation and the skill to throw yourself into matters. It is not for everybody because of the lack of scheduling and plenty of teamwork.  Despite all this, the feedback from the students has been very positive.

– Robotics Academy suits students who are curious, creative and have solution-based approach and maybe a bit of a Gyro Gearloose attitude to solve problems; students who are active and social and can work in teams and want to take responsibility of their own learning, describes Pulkkinen.

Maxime Grégoire from Belgium studied in Robotics Academy during the autumn term and was very impressed.

– This has been the best way of learning for me. I´ve learned the theory in my home country and in the Robotics Academy I had a chance to put that theory into practice. I´ve had an opportunity to experiment, make mistakes and try again. It´s been great to be a part of a community of different people of various ages, Grégoire complimented before his return to Belgium.

Satakunnan Osuuskauppa has cooperated with Robotics Academy a few times. The company was first introduced to robotics and how to utilize it, when humanoid robot Pepper acted as a “barker” at an exhibition stand and a mobile robot guided customers at the opening of the renewed Kodin Terra store.

– We wanted to try how people reacted to robots at our events. The customers´ reactions were positive and we got a favourable picture of the experiment. Robotics is still such a new thing in our everyday lives that robots create a lot of interest, says Communications Director Leena Mettälä from Satakunnan Osuuskauppa.

A lot of work still remains to be done in the development of automation and robotics in the companies in the region of Satakunta.

– Our experience is really positive: our cooperation worked well. Continuing the cooperation interests us; we only need to figure out with innovative students what it could be, Mettälä continues.

RoboAI is the innovation platform for technology

RDI activities that focus on automation, robotics, artificial intelligence and welfare technology at SAMK are gathered under RoboAI brand. RoboAi functions as a global innovation platform for research and development as well as education and competence. The centre of RoboAI is the joint use laboratory of SAMK Campus Pori.

The research and development centre of RoboAI offers companies product development services connected to technology and start-up services to students and budding entrepreneurs. RoboAI provides also retraining and upgrading of qualifications and further education as well as promotes knowledge about technology among children and adolescents and encourages applying for the field of technology.

Robotics Academy and Artificial Intelligence Academy that will start its operations in the autumn are both expert incubators for RoboAI. The aim of RoboAI is to support the growth of technology industry and enterprises in the region, to increase competitiveness and create a solid basis for technological digitalization.

– RoboaAI promotes making new technologies better known by functioning as a neutral test environment and a product development unit for the enterprises in the region. A good example of this is the Indego exoskeleton rehabilitation robot that will be utilized in future in physiotherapist education and several projects but also as an innovation tool for future engineers, Pulkkinen tells us.

Robotics Academy is one of the success stories of SAMK in 2018. The article has been published in Agora annual report.

RoboAI offers technology product development and start up services for the customer as a customized service package. It can be an expert project, rent-a-device service, a joint corporate project, Robotics Academy case or a thesis.

Practical challenges develop innovativeness. Students learn project working, companies´ procedures and one of the most important skills in working life: searching for new technological knowledge and utilizing it in practice.

STEM activities (science, technology, engineering, mathematics) encourage children and adolescents to apply for the fields of mathematics, natural sciences and technology by offering them positive experiences of technology. My Day as an Engineer – visits were started for the sixth graders of the City of Pori in autumn 2018.

SAMK introduces a novel RoboAI entity, which focuses on the RDI and education activities in the fields of automation, robotics, artificial intelligence and welfare technology.

The automation laboratory has enjoyed the company of an international trio as Belgian Maxime Grégoire and Nacho Valero and Jaime Abril from Spain have studied at Robotics Academy.
Dec 12, 2018 | Wellbeing and health

No more Science Fiction – Exoskeleton Robot Teaches How to Walk

Optimized functions and cost-efficiency by simulation