– A totally unmanned ship is still far away, says Dr. Sauli Ahvenjärvi. Nothing happens very fast as seafaring is heavily regulated internationally. Responsibility issues form a big deal: if there is no captain on board, who is responsible – software manufacturer or shipping company?

– There´s no need to fear whether it pays off to educate seafaring professionals any more. The volume of maritime transport is growing in the world, no fully autonomous ships are built at the moment and the life cycle of the ships is long.

When will we have unmanned ships in international freight traffic? According to Ahvenjärvi, year 2030 is an optimistic estimate but still in year 2050 the majority of vessels will be manned.

When talking about autonomous ships we deal with different concepts: there are various levels of autonomy. There are remote-controlled ships, the navigation bridge can periodically be unmanned, an autonomous ship can be manned or unmanned etc.

– There needs to be a financial motive for unmanned ships in the market, says Ahvenjärvi.

The motive can be connected to security or business models and how the whole logistical chain is operated. Major technology companies would like a bigger pot of seafaring. 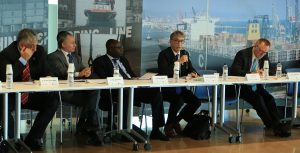 Dr. Ahvenjärvi addressing the partner universities´ Presidents´ Forum organized in connection with IAMU Annual General Meeting where he was substituting for the Managing Director-President of SAMK. Barcelona, October 2018.

Ahvenjärvi has participated in many international conferences to talk about intelligent seafaring, autonomous ships and cyber security and to raise the questions concerning autonomy and unmanned ships. Now the topics have become the staple of conversation.

– This is a new topic, something that is evolving and an expert-based approach enables commenting on the development, making observations, throwing in questions and also questioning matters.

Ahvenjärvi, Doctor of Technology, has worked in duties connected to maritime management for a long time and was formerly developing safety-critical dynamic positioning systems at Hollming Shipyard in Rauma. The safety of ship automation was also the topic of his doctoral thesis in 2009.

SAMK now coordinates the international CYMET project, which supports maritime cyber security awareness and competence in the higher educational establishments of the field. The project is funded by IAMU, International Association of Maritime Universities, with SAMK belonging to the Executive Board. SAMK is also one of the four IAMU Policy and Planning committee members that ponder the future competence needs in seafaring.

– It’s a great place to be as seafaring is experiencing this stage of digitalization and automation.

Cyber security is a current issue

The education field must understand what the future seafaring professionals have to know. The international seafaring education standard STCW (Standards of Training, Certification and Watchkeeping for Seafarers) does not include anything yet of e.g. cyber security. Renewal of STCW is a heavy process so IAMU has started to work on a statement on the topic – it is not an alternative nor a replacement of STCW but brings what STCW is lacking. IMO, the International Maritime Organization which is the United Nations specialized agency, has already added a rule to repel cyber threats by supplementing the shipping company security management system.

Ahvenjärvi points out that cyber security is an acute matter – and the weakest link in the shipping company information systems is the personnel.

– Everyone should be aware of the kind of cyber threats there exist and how they relate to one´s own doings, so that you wouldn´t open doors to cyber threats out of pure ignorance.

Everyone should be aware of the kind of cyber threats there exist and how they relate to one´s own doings, so that you wouldn´t open doors to cyber threats out of pure ignorance.

– The situation needs to be constantly monitored. We have to know how autonomous ships can protect themselves from e.g. GPS spoofing and many others we don´t even know about yet.

The International Association of Maritime Universities (IAMU) had an annual meeting in October. SAMK was elected for its International Executive Board for years 2018–2019.

An international award on safety in seafaring in 2016 has been granted for the project group working in the Seahorse project. SAMK is the only award winner in Northern Europe.
Oct 23, 2017 | Seafaring