SAMK Lecturer, Mari Linna, has been awarded a scholarship by Svenska folkskolans vänner (SFV) for her distinguished work in promoting the Swedish language. Mari Linna was described as a resourceful, pleasant and modern teacher, whose lectures are always interesting.

Mari Linna, who works at the Tiilimäki Campus in Pori, has been teaching the Swedish and Finnish languages as well as communication at SAMK since 2012.

In Mari Linna's view, the best thing about teaching is interaction with students. 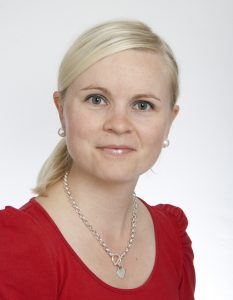 - When I teach, I utilise various functional methods that activate students. I'm a digital teacher, who's currently very much into HILL and I strongly believe in the opportunities of digitising in the teaching of languages. I always strive to look at things from the students' point of view. Det här är mitt drömjobb! (This is my dream job!)

Mari Linna has also worked hard to develop course materials in Swedish for students of physiotherapy. She has also created optional extra courses.

Mari Linna strives to provide authentic situations for using the language during the study modules. Since the autumn of 2013, she has organised the optional Hälsa och välfärd study module in Social Services and Health Care. The study module takes the form of a 3-day trip to Stockholm.

- For several years now, I have collaborated with Vaasa Central Hospital, for example. Their physiotherapists and rehabilitation counsellors personally respond to students' emails. Feedback from professionals in their own field is a great motivational factor for the students. Confidence to use the language increases, Mari Linna says.

Swedish is the second official language of Finland and it is mandatory for Finnish students (either as the native language or as a foreign language). HILL is an online teaching concept, developed at SAMK.