York-Antwerp rules on General Average were revised during 2012–2016. Senior Lecturer Peter Sandell from Satakunta University of Applied Sciences was the first Finn to participate in the revision of these rules.

All cargo owners and the ship owner are responsible for the costs, when a ship strands, or needs to be stranded, and the cargo has to be saved or some of it has to be thrown away for the ship not to sink. York-Antwerp rules (YAR) deal with these kinds of situations and provides rules on how the costs are divided.

YAR have been worked on since 1864 by international representatives. YAR consist of 30 rules and the application areas of the rules are complex and multifold. In 2012 Sandell was asked to join the International group of experts of the Comité Maritime International. CMI makes decisions on the rules included in YAR. Other rules are decided mainly by the International Maritime Organization (IMO) which is a United Nations specialized organization. The rules of YAR were modernized and the costs were divided in a manner which satisfies both the insurance companies and ship owners international organizations.

Rule review is not an easy task since it involves division of costs and affects prices of transportation, transport insurance and commodities. Attempts were made to revise the rules already in 2004. However, the procedure failed as the rules did not gain acceptance by the shipping community.

Immediately afterwards BIMCO decided that the new rules will be included in all maritime charter parties and bills of lading maintained by it.

The rules were completed after three and a half year’s hard work in May 2016. Immediately afterwards the largest international shipping association BIMCO decided that the new rules will be included in all maritime charter parties and bills of lading maintained by it.

“As a result, the new set of rules on risk division made by us is definitely used during the decades to come in about 90 per cent of the world’s commercial transportations and treaties. At sea the percentage will be over 95 per cent”,  Peter Sandell says.

In the 152-year history of the rules SAMK’s Senior Lecturer Peter Sandell is the only Finn who has participated in the revision of the rules.

Peter Sandell, Lic.Jur., is an expert in international commercial law, maritime law and maritime economics. He is completing his doctoral dissertation on the rules of salvage rewards. The dissertation falls under the field of Economic Sciences. This topic was also the main cause of argument in the revision work of the YAR. Since 2012 Sandell has worked also as a legal adviser in the Finnish delegation to the annual plenary session of the IMO’s Legal Committee in London. Sandell teaches in the Master’s Degree Programme in Maritime Management at SAMK.

The orginal text in Finnish by: Anne Sankari 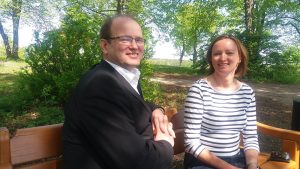 For the first time, an avenue to continue studies in the same field opens up for students who have completed Bachelor's in Maritime Engineering. Conducted in English, SAMK's Degree Programme in Maritime Management starts in 2017.