Elizabeth Mabakeng did her mechanical engineering internship in Rauma. The third year engineering student of Namibia University of Technology is interested in  the possibility to work in various fields. Her dream is to work as chief engineer on board. In this article, she describes what she did and experienced during her 3-month-stay in Finland. Her story is extracted of her internship report.

Leaving Namibia for the first time in my entire 22 years of life was an exciting and also an emotional moment. I was completely overwhelmed and looked forward to my first European experience. In addition to the profound practical knowledge I was to acquire, there was also the chance of meeting new people, making friends, learning new culture and norms and in the same breath, enjoying my stay in Rauma, Finland.

The First Month – thanks to the identical time zones, I experienced no jet lag

The training was fun filled with an introduction to state of the art TRANSAS® engine simulation technology. This apparatus enabled the critical and fast-track problem-solving skills that came with realistic on-board engine room management and procedure. In addition to these simulative sessions, I was enrolled in workshop training; basic safety training at sea and firefighting training within the next three weeks. I acquired skills in welding, maintenance and repair of ship engines, as well as imperative safety procedures and drills needed upon voyage of a ship.

Moreover, my assigned student tutor, Zakir Ehsani and supervisor Chief Captain Heikki Koivisto gave me guided tours of the popular recreational facilities, leisure areas and historic sites like Old Rauma that boasts unique, old, wooden buildings from the 18th century. I also had the privilege of attending a exchange students' Christmas dinner in Pori where I indulged in Finnish festive dishes, traditional Christmas carols and the exchange of gifts between strangers.

During my stay, I learned to ride a bicycle as it is the customary form of transportation in the Finnish community. Similarly, I learned the art of making Finnish pastries (with Dr. Minna Keinänen-Toivola) as a celebratory activity of the 99th year of independence of Finland on December 6. I also experienced the rare beauty of snow, snow angels and the freezing temperatures that accompanied it.

Furthermore, upon invitation from the Namibian Embassy, I enjoyed an early Namibian Christmas and met fellow Namibians living in Finland. I also had first-hand access to the developing relationship between the Namibian and Finnish governments and was assigned various tasks in assisting the process through presentations and focus groups as a representative of the Namibian students. In addition, I met Nina Savela during these meetings and she was more than willing to give me a guided tour of Turku, its rich history and beautiful aging landmarks in the days that followed.

The fifth week entailed on-board training offered by the renowned shipping company Alfons-Hakans. I made a four hour trip, to and from the neighbouring harbour town, Pori and witnessed the notable accuracy in the simulative sessions in imitating the actual procedure and safe management of ship systems. I experienced immense excitement and joy which were followed by the expected sea sickness and fatigue, all of which were bearable.

Likewise, I assisted in the repairs and maintenance of a Wärtsilä engine on a tugboat owned by a local shipping company, Rauma Cata-Oy, between the 8th and 9th week of my training. The workshop training I underwent was vital in successfully repairing and assessing the significant use of tools and stringent, methodical instruction followed during this process.

Again, I finally had a Finnish Christmas on the actual day, making the previous ones a shadow of the one I shared with the Koivisto family, which added further taste, colour and the importance of family to my experience in this beautiful country that I came to love. In light of the on-going festivities, I journeyed to the capital for the 100th New Year celebrations with fellow Namibian friends. We attended the concert held and enjoyed the diverse musical acts and exhilarating firework procession.

The last few weeks of my stay involved further presentations and live conferencing with Finnish education representatives and an observation of the systematic operations and process necessitated in industrial engineering coupled with guided tours of the Port of Rauma. In addition, I had access to the nuclear energy projects in Finland through visits to a nuclear power plant in Rauma.

I visited the popular burial sites, Sammallahdenmäki in Rauma, dating back 4000 years and possibly the birth place of Finnish religion and Christianity. This was followed by an adventurous hiking trail through the vast forest located along the 40-centimetmer frozen thick Pinkjärvi (Pink lake) and a traditional Finnish barbeque which I truly enjoyed.

Although, this was the first internship between the two partner universities, it was successful in reaching the required goals. I believe that with the further implementation of programs such as this in the future, will greatly benefit both communities.

All in all, my internship program at SAMK was truly a once in a lifetime experience and one which I will never forget. It was a learning curve not only academically but personally as well. I encourage everyone to follow life outside their comfort zones, it is always worth it. 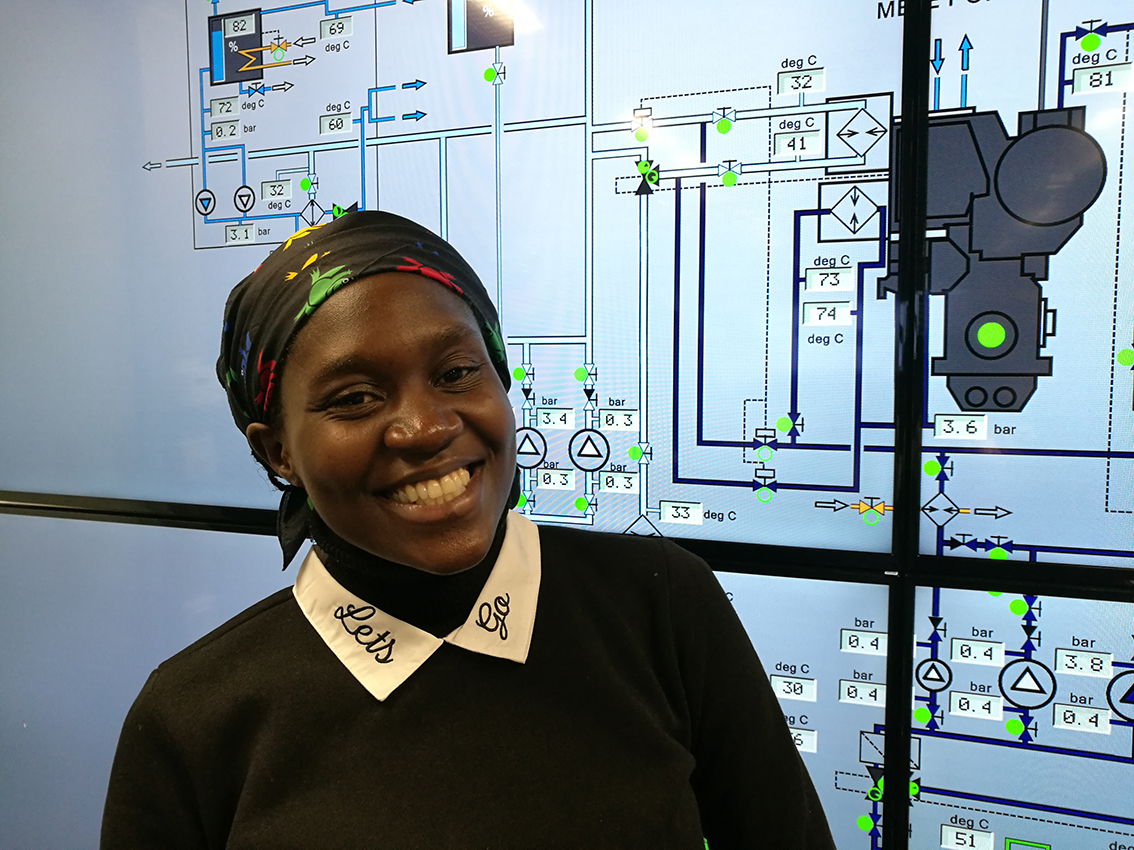 1st student in exchange between Namibia University of Technology (NUST) and SAMK. NUST is one of SAMK’s strategic partner universities.

Born in Walvis Bay. Has 8 siblings, 3 sisters and 5 brothers

Speaks English, Afrikaans and two dialects spoken in Caprivi, where her family comes from. Likes hiking, reading, movies, eating out and sports.

In a joint project of Satakunta University of Applied Sciences and its strategic partner, Namibia University of Science and Technology, resource efficient urban development in developing countries is studied.

SAMK has trained Namibian seafarers since 2012. Now, we will continue with the most important sectors for the county’s development: logistics, technology, welfare and business.
Nov 7, 2016 | SAMK

Master of Maritime Management is a higher education degree intended for sea captains and marine engineers. Dmitry Chutchev has been working on ships since he graduated from the University of Water Transport in Saint Petersburg with a Marine Navigation degree in 1996.

246 students graduated from SAMK in December

Library tips for a new student